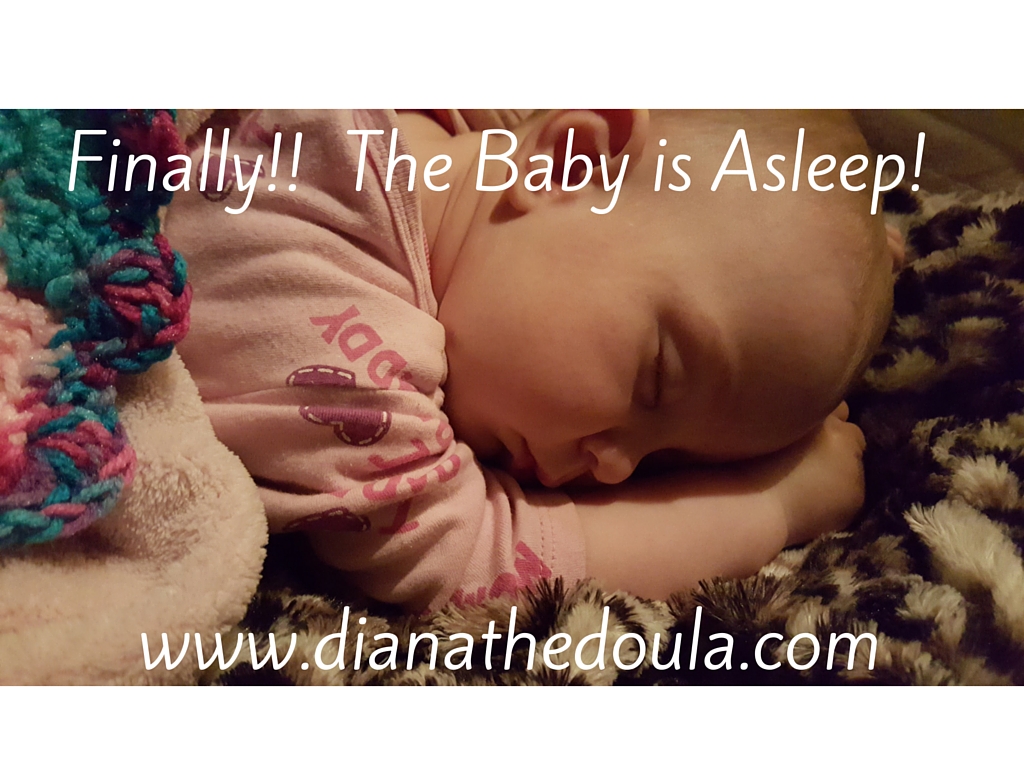 Okay.  So this post has absolutely nothing to do with being a birth doula or childbirth.  I am writing this to express my frustration with getting a baby’s sleep patterns to match my own.

My daughter, Judith, is six months old.  All of my other babies, with the exception of one, have been trained to go to sleep on their own by the time they were this age.  I think I’m getting soft because I’m having a hard time (mentally) training her completely.

I know what I need to do, but again, I’m getting soft.  The way I’ve trained my other babies is by letting them cry themselves to sleep.  I know it sounds harsh but after nursing a baby over and over and over, rocking them for a VERY LONG TIME, and falling asleep yourself while trying to continue rocking them it’s either you’re Superwoman and continue, or you put them down for a little while letting them cry it out, even if only to give you a short break.  I’ve let many of my babies cry until they’ve fallen asleep just to learn that they are now trained (thank God!) to fall asleep on their own, so long as they were tired when I laid them down.  This painstakingly took around half an hour or more sometimes and decreased each time I did it, usually no more than three times total.

I learned this trick when I had my first (Veronica).  She ruled the house and my husband and I were about to burst.  We were recommended the book, “How to Train Up A Child” by Michael and Debi Pearl by a mother of eight.  This book is slightly controversial but it was a God send to me at the time.  It’s controversial because they view training your children (infants) similarly to training an animal and some people don’t agree with this.  Michael believes you can’t rationalize with an infant.  I tend to agree with this (especially at midnight when I’m trying to convince Judith that she’s tired and needs to go to sleep!).

Now, to my defense, I have let her cry in her bed.  When I can’t stand it anymore and she just won’t nurse or sleep I have started putting her down in her playpen just to fuss as a way to tire her out.  If I would just let her continue then her training would be complete; she would go to sleep when I lay her down or play quietly until she’s tired.  But, in my weakness, after about ten minutes, I usually pick her up and find that she will fall asleep easier now that she’s tired.

Unfortunately, as she has gotten older she no longer is interested in sleeping with me full time.  She has started waking up in the middle of the night just to nurse, kick, and fuss.  Well, last night, out of my own frustrations, I nursed her until I couldn’t stand it anymore, put her in her playpen in my walk in closet, closed the door most of the way (expecting to have to endure lots of crying) and laid down in anticipation.  It was 1:10 this morning.

She went right to sleep.  Apparently, she doesn’t want to sleep with me anymore and the little bit of crying she has done has helped!  I had a soft snuggly blanket laid down as a sheet and put her favorite fuzzy blanket on top of her, hoping this will help her sleep.  I’m not sure if they helped or not but it made me feel better.  Then, on her own accord, she just rolled onto her tummy (I lay my babies on their sides) and went right to sleep.  I was thrilled, to say the least.  Now, I am well rested and she is still sleeping.  It’s 7:30 in the morning ladies!!  She usually sleeps this late but in my bed, next to my pillow, where she can smell me.  Now, she’s in her own space!  This is a beautiful thing!

So, ladies, keep up the fight.  Do your best to raise you littles and know that God is by your side, even at 1:10 in the morning.  🙂

Coconut Oil – The #1 Item For Your Baby̵...
What is Toxoplasmosis and Can It Hurt Me or My Bab...
What is Raspberry Leaf Tea and How Can It Help You...
Keep Your Newborn Home!