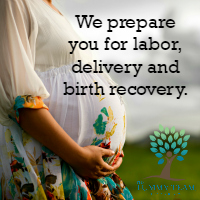 After spending six weeks doing the prescribed Tummy Team exercises, I must say I am impressed.

First off, I didn’t do the exercises as often as was recommended. I don’t have a good excuse. I simply am forgetful.

Secondly, the exercises didn’t really feel or seem like exercises. They were more like breathing exercises and changes to my everyday behavior than like exercising. My husband didn’t actually think I was doing the program! When I mentioned to him that my DR was improving he looked incredulous and didn’t really appear to believe me as he never did see me do any ‘exercising’.

All this being said, my diastasis recti went from a 5 at the center to a 2.5 (finger widths) in the six weeks of the program!! I was and am amazed by this. To be honest, I would have been impressed if my muscles would have remained the same. I am, after all, in my third trimester with #12! With my muscles being stretched to the limit I could hardly believe what I was feeling when I did my final check. I would have checked my upper and lower stomach separation as well but my baby preferred to store too many of her body parts there so it was too tender and bumpy to be able to assess the final outcome.

If you have a DR, please don’t hesitate to sign up, even if you’re pregnant. My baby is actually in the right position for birth right now. As all my babies (except #1) have been posterior I’m still hesitant to believe that this baby is positioned correctly. I’m waiting for it to turn to the posterior position even! But, that being said, my posterior babies have all been posterior all throughout my pregnancies. I’ve been keeping up with her exercises and regularly seeing a chiropractor with the hopes that it will shorten my expected long prodomal labor (always the case with my posterior babies). I expect this one to be different though. I know that if I keep up my exercises and chiropractic care this baby will be in a much better position for birth and will literally just fall out!! Haha! At least one can hope… 🙂 Wish me luck!

Update:  Judith (It’s a girl!!) was born a week and a half later after a long prodomal labor; pretty typical of me.  I’ve been keeping up with my exercises to get my tummy back in shape.  I still have a lot of padding to work off (not Tummy Team’s fault) but my DR has closed down to a 1.  Upon further researching, a 1 is considered normal and doesn’t qualify as a DR.  This means that, thanks to the Tummy Team, my diastasis recti has healed!  Thank you.  🙂

Turn the Lights Down Low and Let the Oxytocin Flow...
Dietary Requirements For Pregnant and Nursing Moth...
Coconut Oil – The #1 Item For Your Baby̵...
Keep Your Newborn Home!

© 2022 Diana the Doula All Rights Reserved