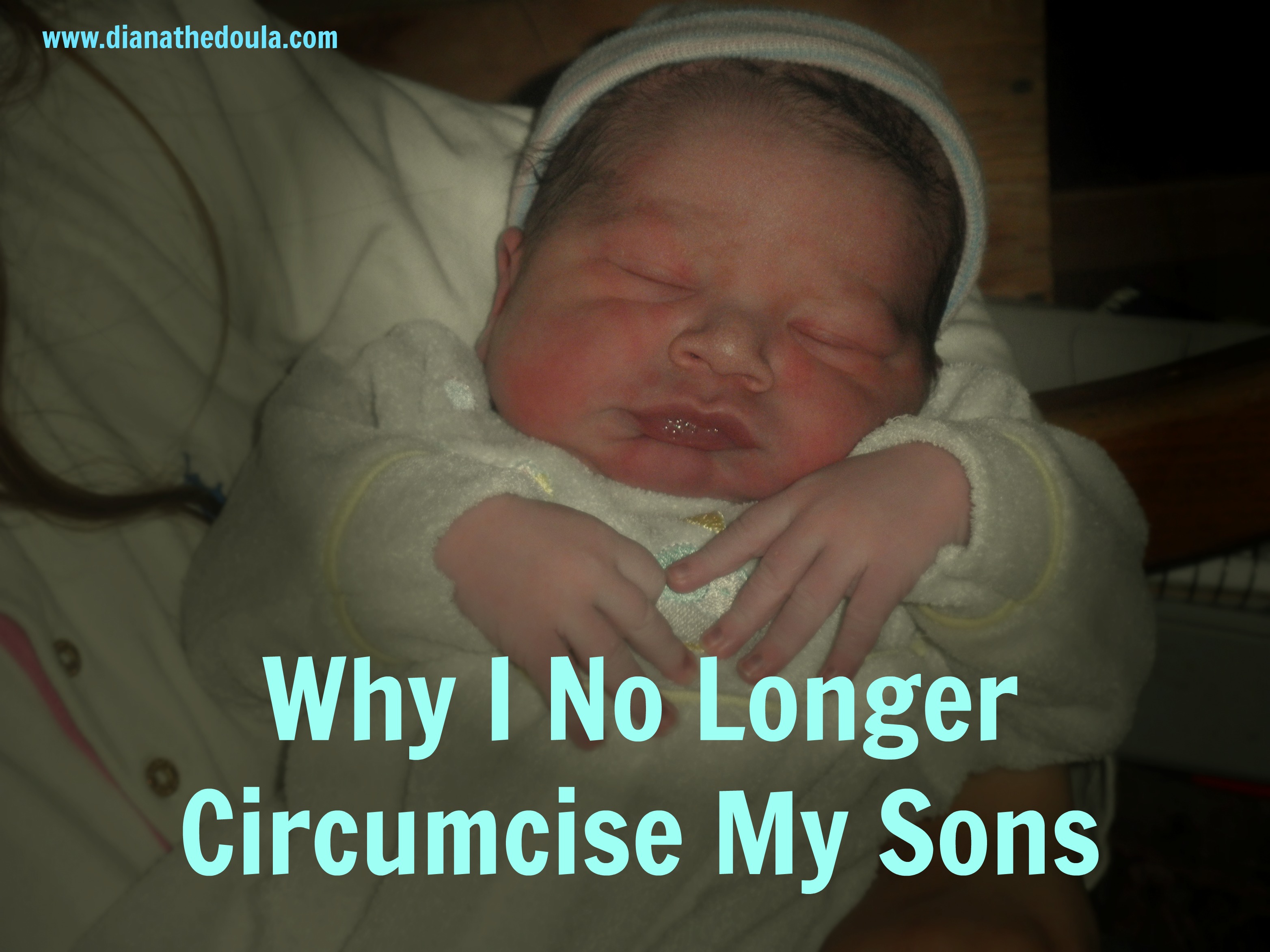 I have five sons.  Of my sons I have circumcised three of them, the first three.  Why did I choose to not circumcise the last two?  I have a few reasons I’d like to share with you.  I will do my best to just give you the facts of the operation but I am going to also give you particulars of my own experiences.  After all, we are all here to learn from each other, right?  Since I have circumcised and non-circumcised sons, I am not here to judge your decisions, just help you make the right one for your son.

Circumcision of a boy consists in removing the foreskin (fold of skin) surgically that covers the head of his penis.  This is typically done before the baby is two weeks old.  It’s a rather simple surgery that many doctors are capable of doing.  However, this simple surgery isn’t necessarily as simple as we have always been led to believe.

The penis is covered in one skin system, with the top (foreskin) of it being the part surgically removed.  In order for the foreskin to be removed it needs to be torn away from the head of the penis.  As an infant it is adhered to the glans as a form of protection to this part of the body.  As the child ages and his body matures it separates itself from the glans.

When I was 21 and taking my son in to be circumcised I was led to believe that it was an extra piece of skin that just got in the way of cleanliness.  This is why EVERY MAN/BOY had it removed.  It helped with cleanliness and manly pride demanded that no man wanted to look different from the other.

The doctor took me and my son back to his medical room and showed me what he was going to do to him.  He showed me that my son was going to cry because he was strapped to the formed operating board/table and wouldn’t be able to move.  They said he would receive a local and be given a sugar dipped pacifier by a nurse to soothe him during his operation.  I was to wait in the waiting room.  They just wanted me to understand why my son would be crying, not because he was hurting but because he didn’t like to be strapped to a table.

Being young and naive I did as I was told.  I’m sure that what he said he was going to do is indeed what happened and having me back there wouldn’t (probably) have changed the operation at all.  I waited in the waiting room until I was called, all the while listening to my son cry.

When I got in there the doctor told me that everything went well.  My son did, however, get a few stitches due to getting accidentally cut into the shaft of his penis (WHAT!?!).  I tried asking him, in a non-offensive sort of way, if there was going to be any long term damage.  He looked at me like he was a little upset (He’s upset??) and said, “Of course, he’s fine”.  He was offended by what I said to him.  Incredible.

My son was fine.  What bothered me was that, one, I wasn’t encouraged to be in there with him, and two, he injured my son and then was offended when I asked how extensive the damage was.

When my next son was born I feel like I was just as naive, even after all that had happened with my first son.  I trusted the doctor, my baby was given pain killers, except this time I was asked to be in the room to comfort my son.  I was reluctant, due to my own feelings of not wanting to see my son get cut on, but I said yes because I also felt like I would be the only one that could help him feel more comfortable.  I didn’t want to feel like I was abandoning him to this stranger.  I held onto my son’s face, kept my face next to his, talked to him, and didn’t watch.

His surgery went better.  He didn’t have any lasting injuries (aside from the surgery, of course) and he healing rather quickly.

This is the little boy that changed everything for me.  The doctor was nice enough, actually nicer than the other doctors, and he had a very helpful nurse.  My husband and I were both in the room with him during the surgery.  I saw them give him pain killer, so I know this happened.  However, I learned that pain killer only goes so far and so deep.

Apparently, my little boy had a little more foreskin than most as I remember the doctor commenting on how much he had and this being why it was taking so long.  There didn’t appear to be any complications, it was just taking a little longer than usual.

I kept offering my baby the sugar dipped pacifier the nurse gave me.  He took it but he had to keep being reminded that it was there.  He would start sucking on it and calm down after just a short time.  I hated the idea of the sugar but was very grateful that it helped my little boy be more comfortable.

The doctor had just finished with the procedure and was cleaning him up when my baby let out this deep cry that I will never forget.  The doctor wasn’t cutting any longer but my son acted like he was in the most intense, deep, internal pain.  There was nothing I could do to comfort him.  This went on for probably a good 30-60 seconds before he calmed down to a wimper.  I was so traumatized by my son’s reaction that I cried many times for what I put him through, all because I thought it was important for him to ‘match’ the others (brothers, friends, etc.) and this is what everyone in our family expected of us.  After all, weren’t all boys circumcised??  No more.

My last two little boys haven’t been surgically altered.  Yes, they look different from their older brothers.  But, honestly, will they be comparing themselves to each other?  I try to teach my children Christian Modesty so I really doubt it.

I was told they would need help with extra cleaning but I haven’t actually seen this.  I wash them up just like I did with my older boys.  No different.

One time I panicked because there was a little redness on my newborn’s penis.  I went to a friend of mine who is a mother of five boys (none of hers were circumcised).  After looking she snickered a little (a little embarrassing as this was baby #9 for me) and said to put a little cream on him and give him some air.  It was just like any other light diaper rash.  Skin just needs to breathe.  Okay, lesson learned.

Outside of that I have never had any problems with my little boys and their parts.  🙂

It’s important to educate ourselves on the pro’s and con’s of any procedure we have done to ourselves and our children.  This post was purely on the emotional aspect of circumcising your son.  I have researched into the medical side of this issue and would not circumcise on what I learned on this side of the issue as well.  However, I researched a little too late for my first three.  I just implicitly trusted what other’s told me.

That being said, I still encourage you to talk with other mothers about their experiences before making your decision with your son.  I also encourage you to do some research online.  Google can be a wonderful resource.  After all, you can’t go back on this once it’s done.  This isn’t a test.  It’s surgery, and it’s very permanent.

Why Your Baby Doesn’t Want a Nursery.
Coconut Oil – The #1 Item For Your Baby̵...
Why do I have so many kids? 🙂
What risks does a mother take having lots of babie...

© 2022 Diana the Doula All Rights Reserved